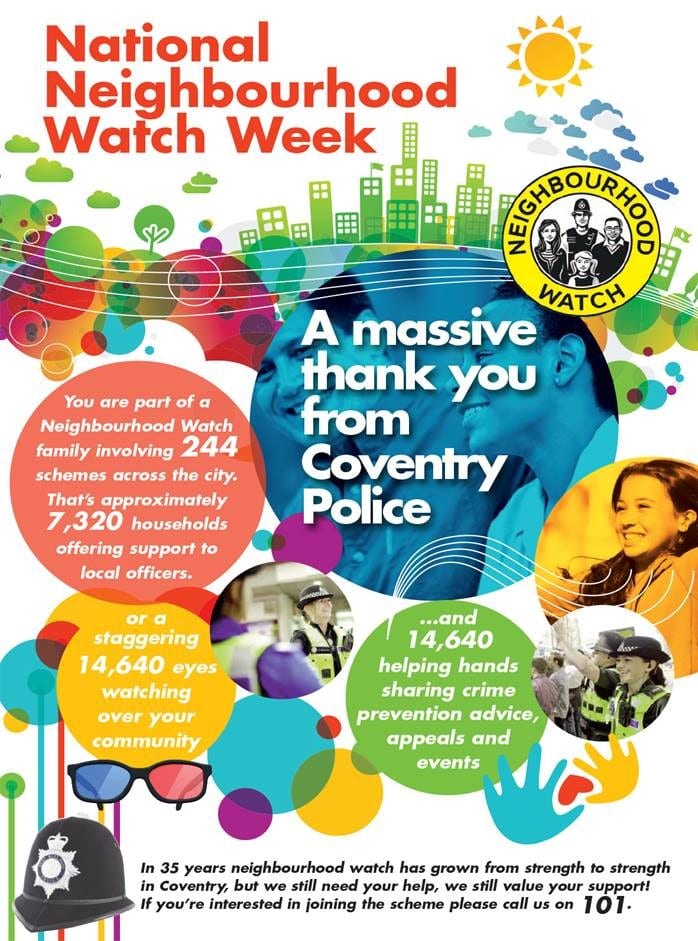 This is the second in a series of briefings organised by Together in Action Trust in offering essential information to interested organisations on important issues relating to Coventry.

Deepak Naik of Together in Action Trust welcomed guests and chaired the Briefing on celebrating Neighbourhood Watch as it enters its 40th year. A minute silence followed to reflect peace for humanity, particularly in the context of a fatal Islamophobic attack in Canada recently.

Cllr Khan reflected on the injustice of people being attacked because of their identity, whether by religion or other forms. The recent killing of a Muslim family in Canada was a reminder. He said that we are fortunate in Coventry because of the work being done by the Council in collaboration with our communities. When tensions arise in other cities, it does not necessarily follow in Coventry as our community groups come and work together.

‘It’s the first time I’ve been in meetings where the newly elected Police & Crime Commissioner has been present, and I welcome him to this meeting’, he stated. He will ensure that all our communities receive the best possible service from our police force.

In 2018, Coventry City Council conducted a household survey which indicated 88% of the people from different backgrounds got on very well with one another. People may know that Coventry is known around the world as a city of peace and reconciliation. This tradition has continued into the 21st century, where faith and non-faith communities have come together to create a great space which we are now developing under the Sacred Space Initiative. The initiative brings back some of the close relationships that originated back in the 1960s and 1970s when people arrived in the UK from different parts of the world and had to support each other during new times and with few resources. This latest idea, the neighbourhood watch for places of worship, again brings back some of the unity of faiths in working together to help support our communities.

Mr Hayward believes that the Neighbourhood Watch has great potential to be a model of excellent practice for communities and neighbourhood, to work together to increase connectivity – communication, safety, and resilience in all communities. Neighbourhood Watch is the largest crime prevention charity across England & Wales, with around 2.2-million-member households and around 90,000 coordinators. Neighbourhood Watch was founded on the premise of bringing people together as neighbours and community. The need for this today is as crucial as it has ever been.

In 2020, a new strategy was developed with the central aim to reinvigorate Neighbourhood Watch to be more relevant and diverse. It was to ensure that the scheme active in all communities by clearly demonstrating the positive impact Neighbourhood Watch has across England and Wales. That is working on the founding premise of bringing people together as neighbours and communities. The scheme will provide the first step for connecting with neighbours for mutual support and offer simple ways to build on that first step with voluntary and community sector partners. There will be an increased focus on increasing Community cohesion and reducing loneliness and isolation.

The role of the Neighbourhood Watch Network is to provide support, guidance, and good practice to local groups. People are urged to become involved in the local association. Communities and groups know what is of most concern to them and how best to resolve this. The key to this is that people have compassion and care about their community. This is the core philosophy of Neighbourhood Watch.

Mohammed grew up in the Foleshill area of Coventry and still lives in the city. He is a retired police officer with over 30 years’ service. He’s seen what harm crime does and what can help communities. His role is to work in partnership with communities and organisations to help reduce crime and bring communities together, especially isolated communities. The goal is to help to restore trust within the criminal justice system and easing local tensions.

Communities working together for a common purpose has benefited us all, such as condemning terrorist attacks where some groups try to be divisive. ‘With all our different faith groups, all standing shoulder to shoulder is fantastic, and it just gave a powerful message out there.’ Faith groups have been helping each other develop funding opportunities from government grants and support each other during religious festivals.

Chief Insp. Littlehales stressed the importance of neighbourhood watch to the community. It is not just about preventing crime but embracing the ‘community feel’ and working together to make a better and safer area. In his 20 years of policing, he has seen the impact of Neighbourhood Watch. It is crucial to establish Neighbourhood Watch schemes in places, not just for the police links but also to build the links between the police and the community.

With the momentum of the City of Culture, there is a window of opportunity to increase the numbers. We all need to spread the word and widen the networks. Chief Inspector was wowed by the City of Culture events recently and the family atmosphere. We can all really make a difference over the next few months.  If anyone has any great ideas, innovations or wants to be creative or just asking questions then please connect with the police and he is happy to listen and support.

Mr Foster related the aims and objectives of Neighbourhood Watch with its approach based around the central importance of community and crime prevention to be entirely consistent with his own approach to the role of police and crime Commissioner.

“I want to be a people and communities, police and crime Commissioner and that for me means engaging with listening to and working with local people and communities that has to be in the very forefront of the role… My approach will always have a strong focus on the importance of prevention because the prevention of crime is always better than having to deal with the consequences of crime. So, following my election, I welcome the opportunity to have a collaborative relationship with the West Midlands Neighbourhood watch,” explained Mr Foster.

He emphasised that we can all work together for the collective benefit of the people and communities of the West Midlands. My manifesto contained an express commitment to be active. An open engagement with different religious communities across the West Midlands to embrace the different needs. And of course, all the strengths that these important groups. The launch of this project in Coventry is a really positive initiative. I think it’s great to see that the West Midlands is blazing the trail, particularly because the eye is on the world now around Coventry was the UK City of Culture in 2021.

This project builds on the valued work, the Sacred Space Initiative to transform the area around Swanswell Park, which needs repair and regeneration and with many local people having fewer opportunity’s and basing mental and physical health challenges. Plainly has considerable potential and resources within communities and encourages people to become active citizens within their own communities. The commitment to connect, empower, develop, support, and promote active communities throughout Neighbourhood Watch is, already explicit in the mission of the West Midlands at Neighbourhood Watch Force Area Association.

If it’s not 999, search WMP Online www.west-midlands.police.UK where you can get tailored advice, live chat to an adviser (8 am-midnight, Mon-Sun), report a non-emergency crime online or track your case. Alternatively, contact us on 101.

If you have information that may assist the police you can contact CrimeStoppers anonymously via www.crimestoppers-uk.org or by calling 0800 555 111.

Preventing crime, protecting the public, and helping those in need.

Neighbourhood Watch has existed in Finham for over 25 years, although for much of that time they have had just three or four coordinators. However, following a 70% spike in crime in our area in 2017, they have increased the number of coordinators to around 18, with each having its own group of members without total membership of around 350 households or so.

Mr Swann genuinely believes that neighbourhood watch has significantly contributed to Finham having one of the lowest crime rates in the city. It enthuses people and brings the community together, acting as a two-way conduit for both information on crime in one Direction and advice to the community in the other direction. CCTV has also made a huge impact in capturing evidence. This has been hugely successful in assisting the police. They have also set up their own website which offers advice on home vehicle and online security along with other information including crime figures, advice on reporting crime, joining, Neighbourhood Watch and Street Watch along with a whole host of useful contact links and phone numbers.

It is not always possible for residents to contact police maybe as quickly as they would like, so it’s good to have our coordinators on hand who are able to offer that advice or put them in touch with someone who is able to.

Mr Gould is a retired police officer who recently organised a successful crime prevention week for the African Community. He has worked with the City Council as a senior manager in community-related work. He now works with Midland Heart where he looks after 5 sites with retirement living. The key thing is to inspire, enthuse and motivate people to get involved and work in partnership with them. Communication and information sharing is vital so that everybody knows what’s going on when it’s going on, what’s being said. We want to make sure that the places of worship Neighbourhood Watch has a broader inclusive methodology.

We have something called the Faith Alliance which would really be keen to invite you to attend. That’s the kind of core consultation forum where we can devise a strategy about how to mobilise faith-based strategies involving everything from spirit shows, reason, moral, ethical, social.

Ms Kaur thanked everyone for attending on behalf of the Coventry Sacred Space Initiative.

This meeting was to inspire and enthuse people to take neighbourhood watch to the next stage of its development. This includes helping faith groups and the wider community to connect to, collaborate and cooperate.

Ms Kaur explained: ‘We have been working together for quite a while and COVID was one of the opportunities to also link in with Public Health England and all the other organisations. It is why we have the highest vaccination management-based groups.’

‘Across the city now today, before you leave would like you to register your interest by joining the working party.  Faith groups and the wider communities are all citizens, and we hope they will participate because they feel included.’

‘You know we are all part of the City of Coventry and how well the city does means we all must do our part. Part of the initial work of this working party will be to establish work protocols, including thinking about simple things such as the dates and times so that you ensure maximum participation.’

‘Consider how we further the PCC’s agenda to involve young people. Furthermore, to remember the impact of crime on women and therefore children. This means ‘thinking creatively and looking at strategies to include wider representation, particularly women.’

‘I look forward to your involvement.’

CST is a long-established charity that provides security at the UK Jewish community’s 800 community buildings and 1000 events every year. It operates through a network of 2500 security-trained members of the Jewish community.

In the last three years, CST has run 130 security awareness events for more than 3000 representatives of mosques, temples, gurdwaras and churches. There is no charge for any of CST’s work. 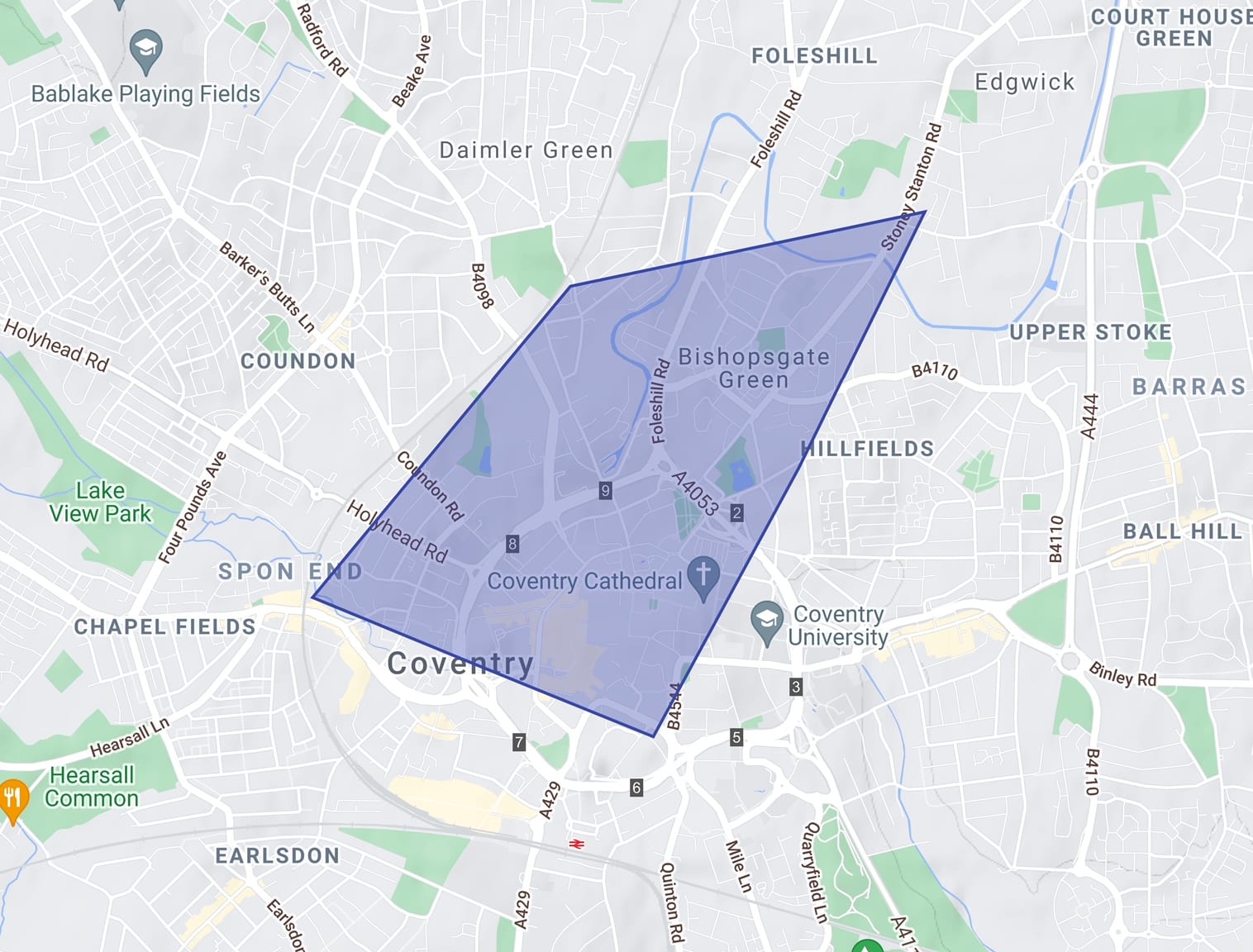